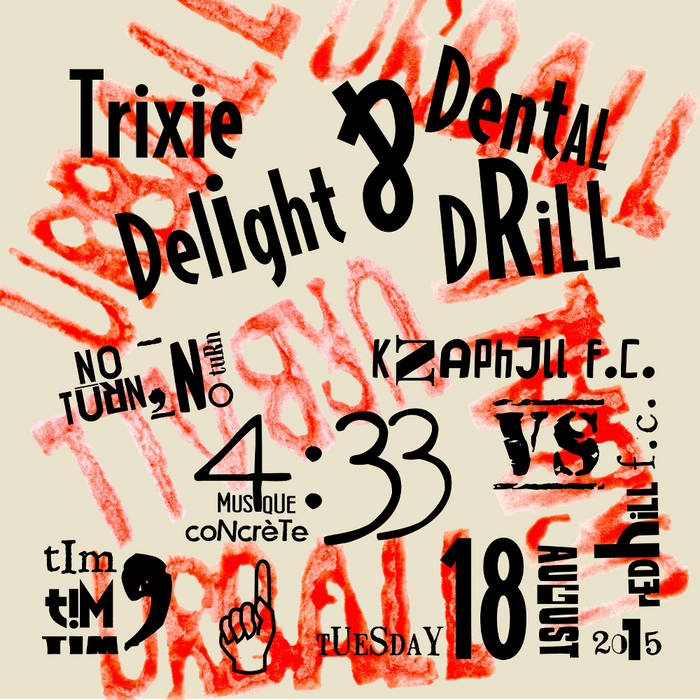 Trixie Delight
Trixie is an experimental music artist who combines field recordings, vocals and traditional instruments. She plays street signs with a cello bow and creates a variety of genre defying compositions through the manipulation of her own recorded sounds. Her debut album 'Peeling Strawberries' was released on dhatūrā records dhaturarecords.bandcamp.com/album/peeling-strawberries
and her 'Sleep EP' was recently released on The Committee For Sonic Research for whom Dental Drill is a producer. tcfsr.bandcamp.com/album/sleep
soundcloud.com/trixie-delight
www.facebook.com/music.trixie.delight

Dental Drill
Dental Drill is the producer for The Committee For Sonic Research, long time member of tourmaline hum and its precursors, and releases solo work as Dental Drill Slips.
soundcloud.com/dental-drill
tcfsr.bandcamp.com
www.tcfsr.net

Trixie Delight & Dental Drill - Urball
Trixie was born in Hannover and lived there for most of her life. She is pleased for the opportunity to contribute a track to this compilation as Hannover is also the home town of Kurt Schwitters, and she is familiar with his work having seen the reconstructed Merzbau in the Sprengelmuseum and read his texts. Her favourite quote is from an ad Schwitters created for the Bahlsen Keksfabrik:
Keks ist Fortschritt - Wer sich mit Keks versieht, handelt auf jeden Fall richtig.
[“Biscuit is Progress – Who equips himself with biscuit is always right”]
Dental Drill had never heard of Kurt Schwitters, but was interested to find out.

The composition process
We felt that the utterances of the players in a football match were just as primal as those in the Ursonate. We recorded the sounds of the football match Knaphill FC vs Redhill FC on Tuesday 18 August 2015, from the ninth level of English football. The crowd was small (around 60 people), so the sounds of the players were predominant in the night air.
We glitched a continuous segment as background noise and used a looped snippet for further background murmur.
We grouped sounds and shouts to patterns and rhythmic events, and spread them loosely over the background to recreate the peaks and troughs of sound at the match. Finally we added a sprinkling of isolated sounds from the match.
We arranged the sounds and patterns to create a listenable and, we hope, enjoyable (and sometimes funny) track.
Dental Drill is a Knaphill fan and was pleased to see a 2-1 victory!
Trixie Delight had never heard of Knaphill FC, but was interested to find out.

The artwork
The artwork is an homage to a poster designed by Kurt Schwitters and Theo van Doesburg for the "Kleine Dada Soirée," a Dada performance held in The Hague in 1922. Dental Drill laid out the black text, whilst the red 'urball' text is from a potato stamp cut by Trixie Delight.